Emerson has been SO excited for her party. Since her actual birthday was on the Saturday before Easter, we decided to delay the party until the following Saturday. Try explaining THAT to a 3 year old! We did a traditional Crouch countdown (where you write the numbers on pieces of toilet paper and let the child pull off one square a day) which helped her understand the difference in her actual birthday and the party day. She talked for days and days about when all her friends would come over. It was super cute. She requested a princess party, so a princess party it was!

Step 1 was the invites. I designed these simple invites that seemed to go over well: 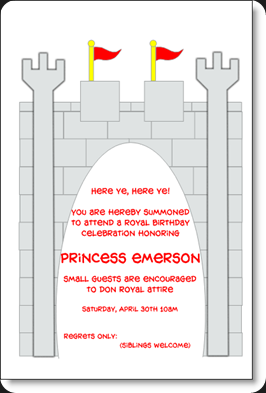 Next, we made our OTC order (love that place) and started working on the castle facade. I also made the girls Pricess Emma and Pricess Ellie shirts for the big day. That turned out to be dramatic as I ruined one of them at 1am the night before the party. After going to bed in tears, King James saved the day by hitting up Walmart first thing the day of the party and I was able to recreate it in time. Whew!

Here’s the pretty birthday princess in her homemade shirt: 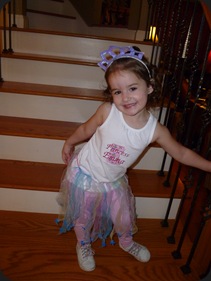 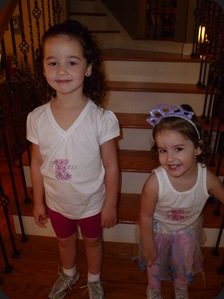 Our guests arrived to the Wiebe Palace through the following entrance: 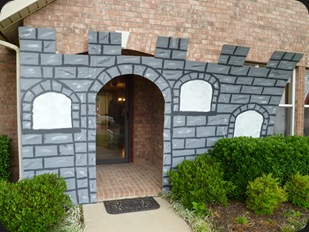 James took a fridge box from Lowe’s (for free!) and painted this on. Seriously, didn’t he do the BEST job?! I was SO impressed. 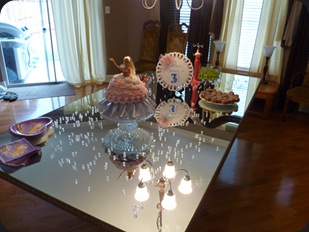 The royal banquet table with jewels strewn about. :) 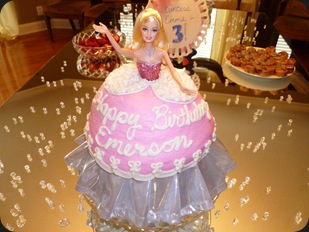 The princess cake! Several have asked how I did it, so I’ll tell you. I made 3 varying sized layers of round cake (the princess requested strawberry cake) and stacked them with almond buttercream between.  I realized it wasn’t going to be tall enough for Barbie’s legs, so I took one of my cake boards, cut it to size with a hold in the middle for Barbie’s legs to come through. I set that on top of a round cake pan and sewed the little silver skirt from some remnant fabric I had on hand. (First time I’ve combined my sewing and cake decorating hobbies!) Then I cut each layer in half and cut a small hole in the middle to piece around the Barbie. Voila! 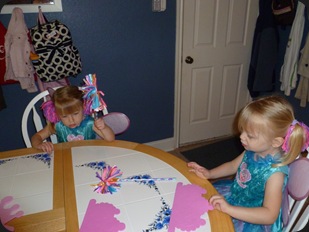 The first activity was for the kids to make their own crowns. There were stickers and jewels to put on them. It seemed to be a hit! (Random side note: We were blessed to have two sweet sets of twin girls at our party. Above is Madeline and Mackenzie and below is Kendall and Emery.) 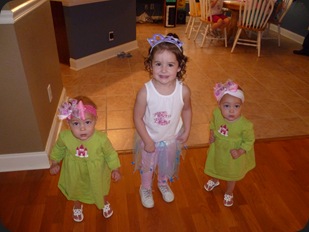 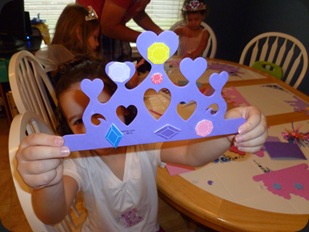 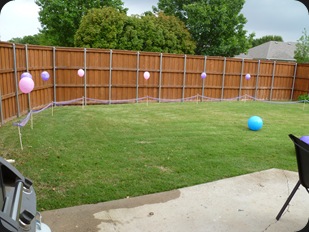 After some fruit and cinnamon rolls, the kids played outside in the Royal Court. It was a little damp from the dew and not enough sun, but with some bubbles and balls, the kids had a great time. We then cut the cake the took a little group shot (minus a couple who weren’t into the paparazzi) 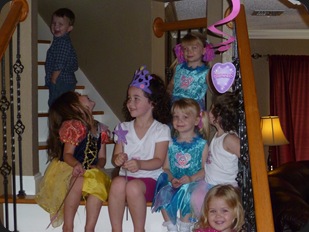 Our one prince was intrigued to explore the forbidden wings of the castle. :) 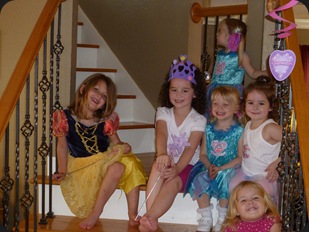 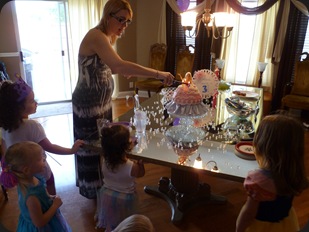 Then we cut the cake! (Does anyone else notice a baby bump in this one?) 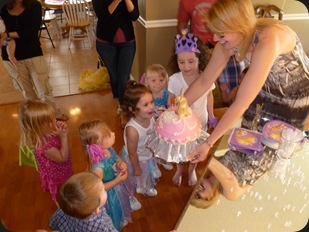 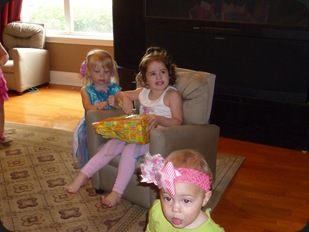 And birthday girl opened her presents 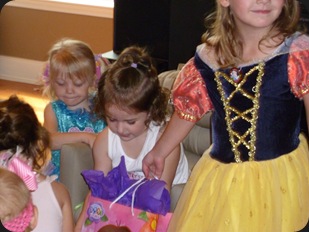 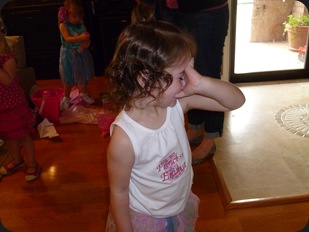 Closing her eyes waiting for the big present from Momma and Daddy! Turns out, I didn’t get a photo of her WITH said present. It was a cute pink Scooter. She’s been sharing Ellie’s and she loved it.

Last but not least, we passed out the party favors. I found this cute castle on sale at Hobby Lobby and we got wands for the princesses with swords for the princes and attached some royal themed finger puppets and little bubbles to each with the little tag. I thought they came out cute, and our little guests seemed to enjoy them: 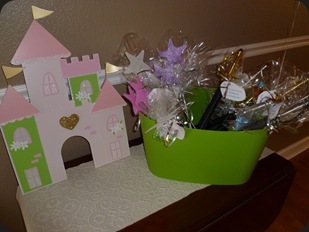 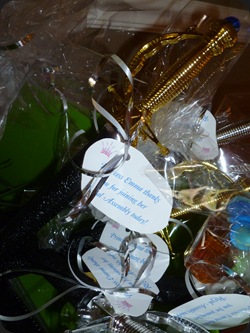 We definitely missed the friends who couldn’t be there, but thanks so much to those of you who could! She had a great morning and loved every minute! Now this tired Momma needs to start thinking about Ellie’s….

Ah, those were all wonderful and it looked like so much fun. You did such a good job and you are so creative, and apparently have so much energy! :)