Despite appearances, Emerson has in fact been at all of the activities in the previous posts. We're obviously getting very bad about capturing that fact, though, so this post is dedicated entirely to her.

We tried to start feeding her solids at 6 1/2 months (a little late per the doctor even then). She just wouldn't do it. So, we waited a bit and in the last few weeks she has FINALLY started eating solids well. In fact, it's like she flipped a switch. She LOVES to eat. Below are some photos of her Aunt Becka feeding her.

She's still a great sleeper, and she has gotten great at sitting and playing with toys. She loves her big sister and they have started blowing raspberries at each other lately which is PRECIOUS!! I'll have to get it on video for you. She smiles often, but still doesn't like to be away from Mama or Daddy for too long. She doesn't like to sleep at church, either.

Her biggest news is that she started crawling right around Christmas. I can't believe she's doing it so early! Ellie was well into her 10th month, so I thought I had more time! Fortunately, Emma is still pretty slow, so life hasn't changed too much... YET!

People ask us all the time if we think her hair will be curly like Ellie's. The jury is still out, but it's looking like it might be straight. Ellie's was maybe JUST starting to show some curl when it was at the same lenght as Emma's, so we'll see!

One little Emma quirk is that her hands are always out all dainty like. She's not one of those babies that generally likes you to hold her hand, either. She wants it out, perhaps in preparation to grab the next thing that captures her fancy. You'll see that in the photo below. 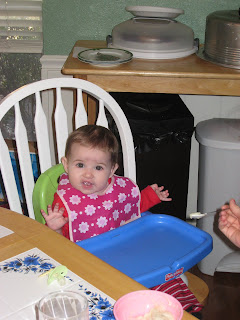 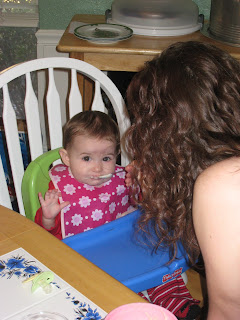 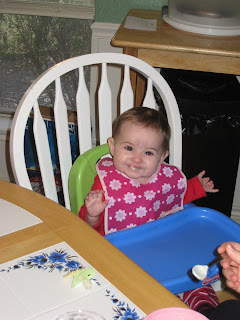