I didn’t want to write this blog. I still don’t. But it started writing itself in my head, and those of you who blog know that there’s almost no stopping it once that starts. I haven’t posted a single thing about the tragedy in Connecticut on Facebook. I haven’t watched a single news story on it. (And I admit – I’m kind of proud of myself for that since by all accounts the media is not doing well with the topic.) Almost everything I know about it is from word of mouth or things my friends have posted on Facebook. I’ll even admit that I haven’t shed a tear. Not for lack of care – not even close. But I’ve sort of shielded myself and “cared from afar”. Selfish? Maybe.

I felt like so many others have said things far better than I can. Case in point… My friend Jen wrote a lovely blog that shares her thoughts so eloquently here. I don’t want to compete with her words or anyone else’s. Part of me hopes no one reads this and it’s just my way of getting this out of my head so I can move on with my day. But there’s the other part that will share it in hopes it helps someone out there, too.

“My” six year old is upstairs in bed coughing next to “my” four year old. “My” one year old is in the next room with my husband. Ellie (the 6 year old) is recovering from a virus. Her fever broke yesterday, which is good news, but her cough is relentless. We all lost at least an hour of sleep over it last night – probably far more for her. As I lay there last night begging God to give her some relief and allow her to sleep, I found myself grateful. Grateful that I could hear her in there and, while struggling, know that she was fine in the grand scheme.

We’ve been home schooling this semester, but we’re sending Ellie back to public school in January. We live in Littleton, Colorado now. You could practically throw a rock from her school to Columbine High School. It’s impossible to remain unaffected by that. Will it be tough to send her to school on January 7th? Without a doubt.

Here’s what I’m reminded of, though. We call our families “ours”. It’s not even totally untrue. The family I have on earth is the one that has been given to me. So…they’re mine. But then again, they’re not. They’re not mine in any sense that I can control. They’re gifts. Each and every one of them from my extended family to these precious 4 people I live with. I’m not promised another day with any of them. It’s not something I even deserve. Such a tough truth to swallow.

Even when Ellie, Emma or Nathan are in my care, I’m still not in control. Something unimaginable could happen to any of them at any time – a thought I refuse to dwell on lest I crumble into a heap of despair. But this is what trust is all about. They belong 100% to my God and Father. And I trust him. Completely. That’s not to say I trust him to keep them with me well into my old age, although this is absolutely my hope. I trust him to take care of me and them in his way which is not always clear to me.

Some question how God could “let” something like the tragedy in Connecticut happen. When he chose to give us the will to choose him – such a gift, by the way – he also knew that in that gift of choice, we’d bring poor consequences upon ourselves. If God stepped in and stopped every evil act, would we really still have free will? I think not…

I posted on a similar theme about a year ago and will end with this: I will use my gift of free will to choose to cherish every moment I have with “my” family. I vow not to question God and his sovereignty in the midst of tragedy – mine or someone else’s. I vow to grieve and mourn the tragedy and not remain unaffected. And I vow to raise my children and influence my part of the world for good and the truth that comes from Christ in hopes of doing my part to minimize the horrible choices that lead to the evil in this world.

They’re not mine. They’re his. And I’m grateful for that, too. 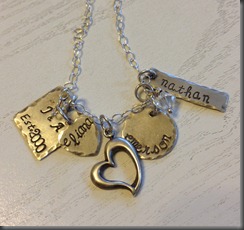