The “big ultrasound” was on June 1st. Finding out the gender is such a big thing, right?! It completely changes your family and gives the little life inside of you more of an identity. Will it be more pink, bows, and princesses? Or blue, cars, trains and sports? I know I’m stereotyping, but the generalities are true… I wish I was one of those people who honestly didn’t care which gender it was. I admire them. I’ve always wanted both genders and really hoped for a boy on this one. I’ve spent a ton of time praying and talking to God about how I trust him no matter what, though. And I really do. Whatever person He chooses to place in our family is the right one. I just knew that if it was a third girl, I’d need his help healing my heart of the dream of getting to experience a son, you know?

By the time of the ultrasound, I was mostly just excited. I thought I’d be nervous and anxious, but I really wasn’t. Just wanted to KNOW! We took the girls to the appointment knowing it would be fun for them to see the baby on the TV screen. My OB does the sonogram himself (as opposed to having a tech), so he came in pretty quickly and got things going. The girls sat in James’ lap behind me and we all watched the big TV screen as baby came on. Pretty quickly, I thought I saw a little boy part, but I had thought I saw one with Emerson, too, so I didn’t put too much stock in what I saw. My OB is “mean” and always does his measurements and stuff first before he goes and officially reveals the gender. He was doing the head measurement and I asked if he knew already. He said, “Yeah, I’m pretty sure I know.” I said, “Well, when are you going to tell us?” “At delivery,” he says. Funny funny man. A few minutes later, he slipped, though. He said “Ok, let’s take a look at his face.” I was pretty sure at that point… Pretty soon, he went over the “area” again, and it was so obvious he just stopped and showed us it was our precious little boy!!! Yea!! We were so excited.

The girls have been pulling for another sister. They were definitely interested in watching the ultrasound, but they were underwhelmed that it was a boy. They were fine with it, but there wasn’t any jumping up and down or anything. :) They were more excited about the lollipops they knew they’d get on the way out!

Baby measured right on target and looked super healthy in every way! Praise God for that!

Here’s the boy photo – our proof! 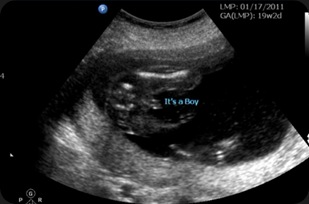 And in case anyone is interested in the full video of the sonogram, here you go! 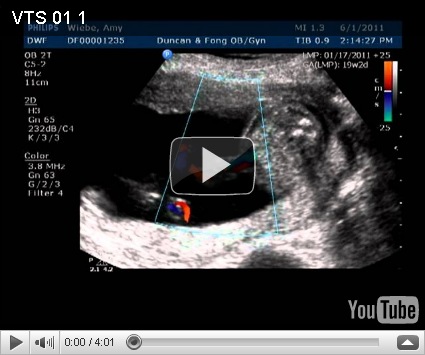 As we’ve let the news settle in, it’s so fun to imagine a little man in our family. He’s going to know how to treat women well with two older sisters. I also love that we’ll get his late teenage years (most likely!) all to ourselves with him. I envision him maybe playing some sport and getting to go watch without worrying about activities for all three kids. I’m afraid this little one might be a Momma’s boy… Can’t wait!!

Anyone who knows us well knows that we don’t tell the name until the baby is born. The girls know about this rule, and they also know that we give “pretend names” until they’re born to make sure we have something to call them besides the actual name. The girls named this one Baby Jerry. I love it since Emma can’t really say her Rs yet. From her, it’s Baby Jewry. Makes me smile every time. I think we have a lot more smiles on the way!